Before we jump into to an extremely heart warming, inspiring transformation story about a cheeky little quarter horse, there are a few themes to be aware of.

Woody is a 9 year old quarter pony who belongs to Bearfoot Ranch. He was rescued as a yearling(ish) from complete starvation. Cops were called in on a tip suggesting animal neglect, and when they arrived, they found four dead horses and Woody, standing alone in a dog cage. His body condition scored a 1, and his flesh actively decayed on him. He should have died.

While vets recommended Woody be put down, the people at Bearfoot Ranch opted to give him a go since he had made it to that point. It took round the clock treatment, hourly handful meals, and lots of prayer, but Woody started to improve. Over the next year Woody put on weight and became more physically stable.

The Rehab and Management

For 7 years, Bearfoot Ranch hosted Woody in their management program working to optimize his physical health, emotional stability, and serviceability. Coming from such deprivation, Woody has taken a fair bit of management to remain healthy. Here are some key management practices that Bearfoot Ranch management instilled for Woody’s continued improvement.

While reaching a stable body condition, for years after rescue Woody’s ability to break down & absorb nutrients was compromised. Malnourished horses commonly have deficient digestive ability because the biological enzymes and microbes living in the gut don’t survive well if there is nothing to eat. Ergo, Woody does well eating a diet based heavily in forage, and a concentrate that uses digestible fiber to deliver supplemental energy instead of starch. Currently, Woody eats Tribute’s Essential K. The added pre & probiotics in the ration balancer help supplement Woody’s microbial count, which will probably always trend slightly deficient.

For years after Woody’s rescue, his body was in catch up mode. Because of poor microbial balance in the gut, inefficient systemic circulation from long term malnutrition and dehydration, and nutrients routed to most urgent biological needs (unhealthy cells), Woody’s immune system was taxed. This means he was prone to diseases and low grade infections. Careful hygiene strategies kept Woody well while his biological health caught up with him, and treatment for rain rot and sole fungus were always on hand.

Because he spent the first few years of his life without developing herd skills (he didn’t know how to horse), when Woody was ready to be integrated in a herd, he didn’t play so well with everyone. Shy, sensitive, and looking for comfort, Woody did well in a quiet herd with a clear dominate horse. Being in the middle of the pack allowed Woody to understand submission and safety, while building some confidence.

After years of dedication to Woody, Bearfoot Ranch managers were delighted to see his physical health peak, which opened the doors for the pony to develop a skill set. This is a pivotal point in any rescue’s sustainable wellness, because very few people enjoy/can afford to warehouse horses. In order for a horse to have a long term home, he needs to have some sort of serviceability. Here at Dreamer’s Knoll, we were so excited to bring Woody on board for training!

Woody’s training can be broken down to three main avenues.

Tuning His Response to Pressure

Upon his arrival to Dreamer’s Knoll, Woody’s response to any sort of pressure was not a willing and polite one. It was fair though, as his outlet to escape pressure had always been to edge someone out of their comfort zone. It does make sense, as with Woody’s history, no one wanted to play bad guy, or push him to overcome fear or stubbornness.

However, now healthy, and ready to move forward, we had to redirect Woody’s response from “NO.”, to “Yes ma’m!” This was pretty simple, as Woody is a bit of a push over. Whether it was yielding hips & shoulders, crossing a creek, or moving forward off leg, changing Woody’s reaction took patient insistence and quiet confidence despite what the pony felt he could give. Pretty soon, Woody’s response went from “No.”, to “?”, to “Yes Ma’m!”, and not only with the specific questions we asked. Woody has become forward minded and brave.

Getting Him to Seek the Right Answer

We helped Woody develop this forward mindedness by getting him to seek out the resolution to everything we put in front of him.

Simple games like asking him to lunge over a barrel helped us shape Woody’s attitude towards work. IE- Asking Woody to trot around the circle and offering him the room to jump the obstacle. He opts out, opts out, opts out, JUMPS, and he’s done. Woody gets to stop, eat, and get the whole “Good pony, your amazing” bit. While this is only step one, it starts to get Woody asking “what to do to get the release”. Particularly for a kids pony, this mindset will keep Woody more honest and dependable than if he were drilled through questions by force.

With Woody becoming, safe, fun, and dependable, we hit the road and started putting him in different scenarios. We needed to check boxes off the list before Woody found a home. Things like

Do you travel well?

Do you fold under pressure?

Can you physically hold up to stress?

How are you in new situations?

all needed to be addressed. Sure enough, we checked the boxes and started looking for Woody’s next home.

Today, Woody is being leased out at Free Form Farm with his person Sara. He is loved, taken care of, and developing the oh so valuable skill set that will keep him taken care of for years to come! Thank you to Free Form Farm and Bearfoot Ranch for loving such a lucky pony! 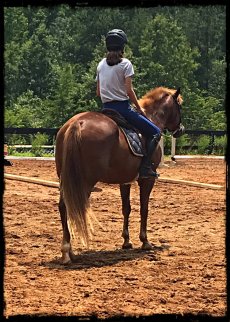 2 Comments on “From Starvation to Silver Spoons, Woody’s Success Story”